THE SCHOOL GATE SET HAS MOVED

Thanks to our Ingenious funding, we are now working more closely with Jan Peters and Karen Dickens. Jan founded the Science Sisters project, which helped to inspire the School Gate SET, and Karen was one of the original members. They are both passionate about science and technology communication.

Jan and Karen will be helping to develop and deliver our confidence-building and training workshops for career-break parent volunteers. The workshops will be held in and around Hertfordshire and Dorset during the next academic year.

In the coming weeks, we will also be hosting a series of webinars, discussing the School Gate SET project and answering questions about how you can get involved. The schedule, so far, is:

Wed 29th June at 9:30am: Kate Bellingham talks to Jan Peters
‘Beyond ‘listening to readers' - how I helped support STEM at my children’s school’
VIEW HERE

If you can't join in, live, recordings will be available afterwards on the Facebook page and blog.

Email ThisBlogThis!Share to TwitterShare to FacebookShare to Pinterest
Labels: NEWS


Don't have time to watch the recording? Questions and answers are summarised below...

"Why are you focusing on Primary Schools, rather than Secondary?"
Parents tend to develop a closer relationship with their children's primary school. There are more events that parents are invited to participate in and more calls for help (e.g. supervising class trips, listening to readers, fundraising etc). We want to make it much more common to extend this help to science, technology and maths. Primary school teachers need to have knowledge of a wide range of subjects, but many of them do not come from a STEM background and can really appreciate extra support in these areas. Finally, the primary school years are when mothers, in particular, are more likely to be on a career break or working part time and so have time to get involved during the school day.

"I want to help out in my nephew/grandaughter's school. Is the School Gate SET only for parents?"
Of course not! The important thing is that you have the time and energy to build an ongoing relationship with the school. You might also be interested in signing up to the STEM ambassadors program. They will arrange a DBS (criminal record) check which will allow you to work with and inspire young people across a number of schools.
"My daughter is only in nursery.  There’s not much I can do to help such little ones. "
We hope that the school will want to take advantage of expert help across all year-groups, not just your child’s class.  For example, we have had a Mum whose child is in reception giving Forensic Science workshops to Year 5 & 6.

"I work full time for an engineering company but I’d really like to help..."
Does your employer support the STEM ambassador program?  Many companies are aware of the looming STEM "skills gap" and are keen to inspire the next generation of scientists and engineers. They may give you time off to work in a local school.

"Does it matter what kind of STEM background I have?"
Not at all. It's important for children to be aware of the wide range of careers available to them and to realise that science, engineering and, of course, technology underpin so much of modern life. For example, a parent who works in graphic design ran a very popular after-school club teaching computer animation. Please be aware, though, that to take part in the Ingenious workshops, funded by the RAE, we do have to give priority to parents with a background in engineering.
"Does it matter where I live?"
No, we want the School Gate SET to be a nationwide project. We are very active on social media; post all our news and activity ideas online; and are happy to chat via Skype or e-mail. Note, though, for Ingenious funded training workshops we have a very limited budget for travel, so these will be taking place in and around Hertfordshire and Dorset.

"What will I be expected to do?  I’m very out of touch with my science background!"
It's important to talk to the school about how you can adapt your interests and skills to the school’s needs. We can provide plenty of ideas and advice for that initial conversation. It's not necessary to stand up in front of a whole class of children: you could administer the school website/computing equipment; suggest activities to extend and enrich the curriculum; or help with the paperwork for, e.g., the Primary Science Quality Mark.
"What is the commitment if you join up?"
Our School Gate SET members are all volunteers, so any time you can spare we are grateful for. We hope that you will want to become a STEM Ambassador and develop an ongoing relationship with your school.  For the Ingenious workshops there will be one training day (confined to school hours) and delivery of at least one activity for the school.

"What is the Ingenious training? When and where will it happen?"
The training will focus on confidence building and Strengths assessment; tips for working in schools; and the opportunity to practice delivering a specific engineering activity. We anticipate that the workshops will run in October 2016 so that you will be ready to go into schools to support "Tomorrow's Engineers" week between the 7th and 11th of November.

"Strengths" assessment...?
We will be using the Gallup Strengths Finder tool, a personality-type tool which helps to identify what your unique skills are and how they enable you to work best and relate to others. This can be particularly important if you are thinking of getting back into the workplace after a career break, but is also really useful for working in schools as you can recognise the children's different learning styles and adjust your approach to engage meaningfully with them.

"How do I keep in touch?  I don’t do Facebook or Twitter."
Keep an eye on this blog and/or sign up for our newsletter. Don't worry, we won't bombard you with e-mails: just an update once or twice a term plus any really exciting news we have to share!

Got any more questions? Ask us in the comments... 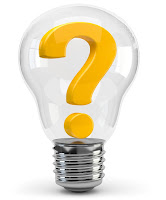 Email ThisBlogThis!Share to TwitterShare to FacebookShare to Pinterest
Labels: About us, FAQ

Webinar - Beyond listening to readers


School Gate SET - Beyond listening to readers from Jan Peters on Vimeo.

Here's the recording of our first webinar, recorded on 29 June 2016.

Grab a coffee and find out how Kate Bellingham and Jan Peters started helping with STEM in their children's schools, and why they are now leading the School Gate SET to get more parents and schools involved. 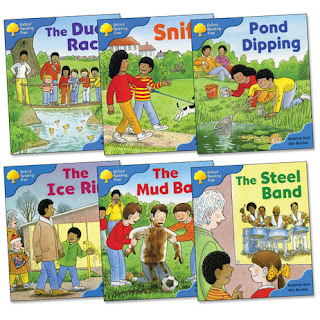 Posted by Kate Bellingham at 03:23 No comments:

Email ThisBlogThis!Share to TwitterShare to FacebookShare to Pinterest
Labels: About us 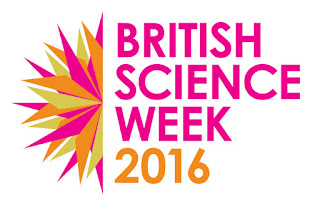 Graphic designer, Lindsay, has 2 children, ages 9 and 7. As well as being a governor at her children's school, she designed and administers the school website. Last term she ran an after-school animation club, showing pupils how to make stop-motion films using an iPad app.

The early-years teacher at Lindsay's school, Claire Eagling, heard from some of her pupils how much they were enjoying Lindsay's club. Claire wanted to organise a "STEM" day during Science Week, specifically for Reception, Year 1 and Year 2. She had read about the "Electro-dough" activity on the School Gate SET website. Also, one of her pupils' favourite activities is a "dough disco", which promotes fine motor skills. All these ideas came together in her head and inspired her to plan a "Dough Day". 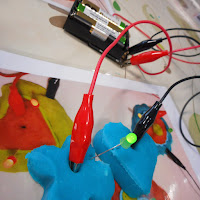 The children would be divided into groups and cycle round several dough-themed STEM activities: electro-dough; stop motion "clay" animation; making play-dough; cornflour goop; and the dough disco. The day would begin and end with a discussion: asking all the children what it means to be a Scientist or Engineer, and seeing if their answers changed over the course of the day.

Lindsay ran the animation activity, with help from another two parents. As the school is local to me, and as I recently registered as a STEM ambassador, I went along to help with the electro-dough activity.  The teachers and classroom assistants delivered the other activities.


Some of the children’s ideas before the day:

And during the day: 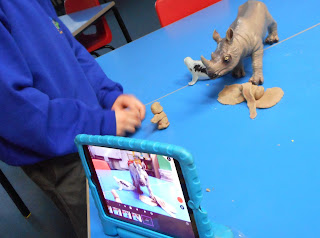 “You take pictures and move your dough a little bit each time and when you’ve taken loads of pictures you’ve got a film. We did 208 pictures!” 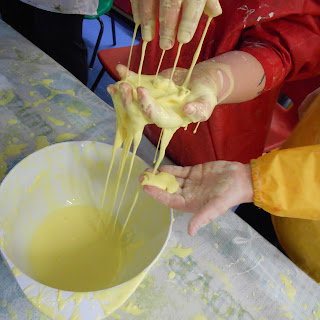 “Quicksand sinks but you don’t sink all the way into it and I experimented with the animals in the cornflour and they sunk but not all the way down. It was wet at the top and stiff at the bottom.” 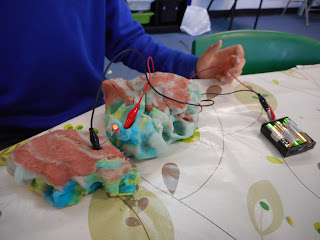 “The electric goes through the dough to make the bulb light up!”

At the end of the day:

The children really enjoyed their STEM dough-day. One 6-year-old girl said “I wish it could be like this every day. I’m going to be a scientist when I grow up!”; while one of the boys said “I am a scientist now! They do electrics!”

Feedback from the teachers and teaching assistants was also positive:

“I didn’t realise that dough would conduct electricity. It’s exciting to have some expert help to teach this as I’m not very confident teaching Science.”


“The children have got so much out of the day today. The fresh ideas that the parents have brought to the table have proved very successful.”

In fact the teaching assistants, who had previously expressed a preference to stay with the same activity all day, said that, in retrospect, they wished they had had a chance to take part in all the activities and share the children's experiences.

If you are interested in organising your own "dough day", or similar event, Claire has made her planning available here. It includes links to the National Curriculum and to the School's topic for the term, Africa.
Posted by Helen at 06:15 No comments:

We're pleased to share our press release for the Royal Academy of Engineering Ingenious funded project.

Please view, download, share and generally spread the word.  The focus for this project is on engineers, technologists and technicians based in the South Coast region or in Hertfordshire - but we are still keen to hear from parents with interest in all STEM fields and in all areas of the UK as we grow the network.

Email ThisBlogThis!Share to TwitterShare to FacebookShare to Pinterest
Labels: NEWS

We are very excited to announce that The School Gate SET has been awarded an RAE "Ingenious" grant! This awards scheme supports innovative projects that engage the public with engineers and engineering.


awards scheme for projects that engage the public with engineers and engineering - See more at: http://www.raeng.org.uk/grants-and-prizes/ingenious-grant#sthash.6Bta37Yo.dpuf
Over the next three months we will be recruiting 40 career-break engineers, technologists and technicians whose children are in primary school. As well as the existing School Gate SET activities: building a relationship with their children's school and supporting the STEM curriculum; these parent volunteers will be invited to register as STEM ambassadors and to attend specially designed training workshops.

These free workshops will be held in participating schools in Autumn 2016, during the school day. They have been developed by project co-ordinator, Kate Bellingham and certified Gallup Strengths Coach, Jan Peters, both long-time champions for women's participation in science and technology. The agenda will include:
Participating parents will also be encouraged to (re)connect with professional organisations, such as the Women's Engineering Society (WES), The IET or The IMechE, who can suggest opportunities to resume their career in a way that fits in with family life.

To minimise travel costs, these workshops will initially be running in Hertfordshire and Dorset, but we want the School Gate SET to keep growing, nationwide, and will continue to provide online support, activity ideas and mentoring.